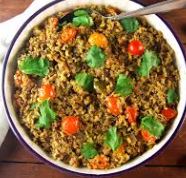 Looking to get healthy while enjoying awesome taste of Pulao ? What if I said Sprouted Pulao can be equally tasty and healthy when prepared without oil ? That’s true, I will put some lights on how to make Sprouted Pulao without Oil.

Generally people in India assume Pulao is a healthy item as its prepared with vegetables and sprouts like moong or Chana.

This same pulao becomes a slow poison when we add Oil to it. Please! Please! Please!… ignore the so called healthy Oil ads that runs in TV commercial and marketed as safe to be consumed.

Oil is carcinogenic and it gives rise to bad cholesterol, triglycerides and free radicals. Time and time again studies on this subject proves OIL is really very bad for your heart. The sooner you adopt oil free cooking the better it gets.

Let’s start by eating same pulao with same taste but without oil.

2.) Rice (You may take brown rice to make it even more healthier)

Step 1 : Boiling Rice
Boil the rice along with Cinnamon, Cardamom, Parsley leaves and cloves.
Cook it normally like your regular rice.
Once done keep this rice aside.[quads id=”2″] Step 2 : Boiling Sprouts
Boil you sprouted Moong or Chana
While boiling add salt so that it cooks faster.
Once its boiled nicely keep it aside.

Step 3 : Roast It!
Take a non-stick Pan and heat it.
Start by adding Cumin seeds and bay leaves.
Sauete it untill its mild brown and it starts crackling

Your 100% No oil Sprouted Pulao or zero oil sprouted pulao is ready to be served.

Zero Oil cooking can be perfected with time. Initially there will be hiccups but once you learn it your family will be healthier. You can master the art of making oil free food following Step by Step Zero Oil cooking recipe guide.