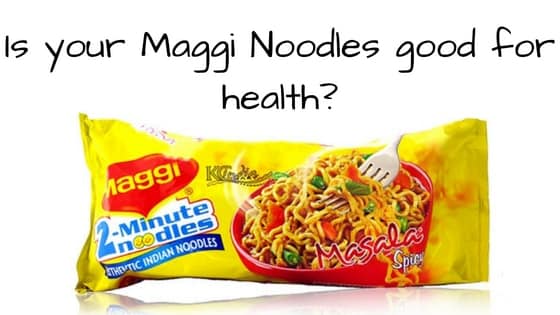 There are a couple of interesting questions when it comes to eating Maggi.

Is Maggi Noodles good for Health? How delicious would the life be if we could swallow it three times a day? How many days will it take to grow out of the secret Maggi masala of this 2-minutes noodle?

We know that even bible calls excessive eating, gluttony, a sin.

We also know that it is human’s nature to look for instant gratification and nothing works better than a bowl full of deep-fried noodles.

Maggi, the quick food for bachelors has recently raised more eyebrows that Trump and Kanye combined and the number rose when they claimed that the New Maggie in 2018 is healthy.

But, this is not the first time Nestle, the world largest food and Beverage Company in the world, is claiming that Maggie is a healthy snack.

Even in their official website introduces their brand as a company committed to enhancing the quality of life and contributing to a healthier future.

Well, these are tall claims to keep. And I am in no haste to believe it. There are hundreds of products that Nestle manufactures, but let’s focus on one – our Maggi.

What is it about this wheat-flour magic that people are so concerned about? Is it really unhealthy or is it a hoax? Let’s find out.

If you turn around Maggi’s yellow-red packet, you’ll see, in small but readable print, all of its ingredients. There are two sides of the equation, first the noodles and second the magical Maggi masala.

Noodle is simpler but still looks like a lot of labor.

What is Maggi Noodles made up of?

It has Wheat Flour, Salt, Wheat Gluten, Mineral, Guar gum and Edible Vegetable oil. On the other hand, its tastemaker has a bigger list: Sugar, milk solids, hydrolyzed groundnut protein, acidifying agents, flavor enhancers, and many other ingredients that don’t even sound healthy.

Maggi is basically Maida—wheat flour–not whole wheat but the refined unhealthy version of it.

Moving forward, it also has unspecified vegetable oil. Nowhere in the packet, has it mentioned anything about the type of oil it uses, despite being a crucial part.

If Maggi is preferring what other noodle manufacturer’s use, palm oil, then it does no good to us. Palm oil is one of the worse kind of saturated fats.

Some years ago, products used to prefer similar hydrogenated Trans fats, which was banned for their ill-effects.

The question remains, how a noodle could be healthy if it uses such a high amount of oil, both in the cake and the taste maker.

While there is nothing more than flour, eggs, salt, and water in home-made noodles, why does Maggi need oil? Why does a product that claims to be healthy, deep-fries the very product before distributing it? Isn’t that Strange?

The answer to all of the above questions could be that it enhances the taste. But then do consumers prefer: health or taste? Can’t Maggi be both healthy and tasty at the same time?

Let’s look at the other ingredients I found with tons of seasonings.

The amount of seasoning it uses is what becomes a part of its royal taste becomes.

But again, the seasonings do not do any good to our stomachs. Although, there are certain condiments that help digestion and metabolism, the ones in Maggi are not.

The sodium content of Maggi is appalling too. It might even scare the living daylight out of you.

Maggi might not taste salty but it does have a lot of sodium, primarily because it also acts as a preservative.

If we believe the reports, the sodium content of a single packet of Maggi goes up to 1200 mg.

As per the international standard, also referred as Recommended Daily Allowance, a human adult should not consume more than 2400 mg of sodium in a day.

This roughly means anyone who consumes more than two packets of Maggi in a day is in premises to get affected by the ill-effects of sodium.

A couple of years ago, Maggi was banned for a long stretch from the Indian consumer market.

There were people on roads striking against the decision–social media was jamming with ‘miss you Maggi’ hashtag—nutritionists were discussing if the ban was legit or not.

Apparently, it was a big loss for India to lose one of its favorite noodle brands.

The ban was a result of finding lead and MSG in Maggi.

Reportedly, the lead levels were significantly high. It was above 17 ppm, while the permissible amount is 0.01 ppm.

Taking the extensive amount of lead, experts say, may lead to psychological and digestive problems.

There was another ingredient, MSG, which was much higher than the permissible amount too. MSG intake causes a neurological disorder and both of these ingredients may lead to cancer.

Maggi eventually improved their formula and relaunched new Maggi, which was, as per the claim, much healthier and tastier.

Of course, there is immense love for Maggi in the Indian society, not just because it is tasty or quick to make, but because most of us grew up with this product.

Products like these get attached to our psyche and Maggi was no different.

Maggi is not the healthiest option out there but look at all of us. We all want some Maggi in our bowls once in a while for its taste and the strange attachment we feel towards it. So, how can we stay healthy and still insert it into our diets? Here are some of my tips:

Maggi, especially for millennial’s, is more than just a 2-minute noodle for the stated reason. Understandably, it is hard to walk away from a product like Maggi.

But what If you are thinking that Maggi altogether is a bad idea, and would like to explore some of its alternatives?

Here are some of my favorite picks which will both fill the void left by Maggi, and keep you healthy at the same time;

One of the most underrated dishes of all times is Poha.

And we are tired of hearing from people that Poha is plain and tasteless. Well, Poha is one of the tastiest fast snacks available out there, if one knows how to garnish it with right kind of ingredients.

It tops my list as with this you don’t have to compromise on ease or taste.

There are many ways you can experiment with it and mix it with a wide range of garnishing: herbs, mixture-snack, groundnuts and more. Some people also add lemon and seasoning to amplify its taste.

Oats are healthy, and Oats Chilla is healthier. To make Oats chilla, prepare the besan batter with semolina and crushed oats.

This hardly takes 10 minutes to prepare and is also very healthy. It is a good protein source, best for your breakfast.

This is the closest you can get to Maggi for its texture and the variety of experiments that you can do with it.

You can add loads of vegetables and side snacks to make it healthier. This is truly what Maggi has been advertising for years, ‘Taste bhi and health bhi.’ And like always, you can use some lemon to make things better.

Omelet is an old friend, as eggs have been there way before than us.

It doesn’t take more than 5-10 mins to prepare and is always handy to keep hunger at bay. Depending on how spontaneous you are, you can mix it with the other vegetable and ingredients and enjoy the goodness of this Maggi alternative.

So is Maggi noodles good for health? My verdict would be no, but if the cravings start playing games then limit it to one Maggi a week backed by tons of veggies to make to healthier.

Having said that one must avoid Maggi if suffering from any underlying ailments such as blood pressure, Poor metabolism and liver related disorders.

Furthermore, try to avoid Maggi in pregnancy as it may just not be a good fit.